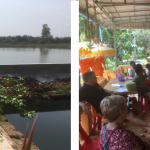 The Rotary Club of Balwyn provided funds to de-silt an ancient water storage in the Varin area of Cambodia, to allow stocking with fish, thus making it a commercial sustainable project.  The proposed arrangements were discussed with community leaders in a meeting that lasted over two hours.  They understood and agreed with the concept, but were concerned that theft of fish by locals was likely. They proposed a regime of night-time security patrols to overcome this problem.